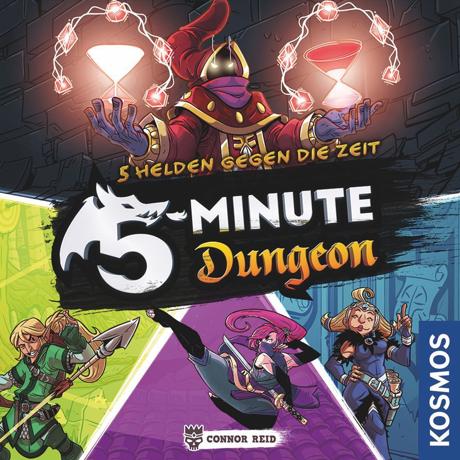 5-­Minute Dungeon is a chaotic, co-­operative, real-­time card game in which players have only five minutes to escape the randomized dungeon. Communication and teamwork are critical to survival because there's no time to form a carefully considered plan — and no predicting what dangers lie ahead.

In more detail, players assume the role of one of ten heroes, each with special cards and abilities. Once the five-minute timer starts, the race is on to defeat all the monsters inside the dungeon. In order to defeat a monster, players must match symbols from their hand with ones on the monster's card. At the end of each dungeon is a powerful dungeon boss — and after the first boss is defeated, the campaign continues to the second boss. Each boss, and each randomized dungeon, gets harder until players reach the fifth and final boss.