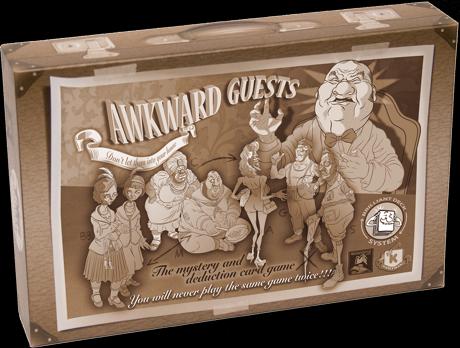 Awkward Guests / Incómodos Invitados is a one of a kind deduction game with infinite re-playability. Based on the innovative Brilliant Deck System!

It can recreate Mr. Walton’s murder in so many different ways that you won’t ever play two similar games!

Its engaging Brilliant Deck System will actively involve you in the investigations, allowing you to use genuine detective abilities to solve each case.

To solve a mystery, you will have to interrogate the suspects, question the household staff, examine the crime scene, search for clues around the Walton Mansion, consult the police reports… You will do all of this while exchanging information with your opponents or hiding it from them.

Get ready to use all your gumshoe skills!

Will you be the first to solve the mystery?

Awkward Guests / Incómodos Invitados base game mechanic is quite simple. Players have a hand of 6 cards. Each card has a value (1, 2 or 3 points, according to the amount of information that it provides) and several references (the matters that the card information is about). During his turn, each player ask for information about two different references he is interested in. The rest of the players can offer him cards which contains the requested references. The asking player can trade those cards by giving the offering players the same amount of points they have offered, with cards of his hand and no reference restriction.