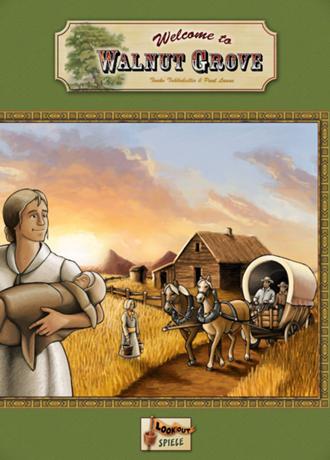 Walnut Grove is a cross between jigsaw puzzles and worker placement, with the players as farmers who find their plots merging into a single landscape as time passes and their holdings grow. Come fall they must head to the city with their goods as winter will soon return.


Walnut Grove could be described as a light mashup between Carcassonne and Agricola. The goal of the game is to develop your own ranch. The better the ranch, the more points you will score at the end of the game. Players can improve their ranch during the game by adding new land tiles to it, hiring more workers, building improvements, etc

In the city you can hire workers, trade goods to coins, build improvements, and so on. Each player may do only one action in the city though. The city is a kind of rondel that is divided into halves; each time you cross the midline you have to pay a coin. Therefore it is wise to move as slowly as possible on the rondel, but then again, you have consider what actions you want to take!

The land areas will produce resources when you place the workers there. Also, the tiles do not need to match, but you want them to, as larger areas of the same type will give you greater production.